“Well, your parents escaped Congo with your brothers and lived at the Rwandan refugee camp. After a year there, they decided to immigrate to America, and you,” Tate booped Umutoni’s nose, “were born a month later.” 6-year-old Umutoni Sebunyenzi’s eyes widened as she listened to the bedtime story her Grandma Tate had told her a million times.

Every night she would beg for a story, and Tate readily supplied them. Africa came alive in that bedroom, and Umutoni soon knew the life stories of people she had never met before and the history of the wars of power that ravaged Congo. Her grandma was her connection to Africa, and those nights were like a magical portal to her family’s homeland.

However, as she grew older, her pride for her culture sputtered as she began to feel uncomfortable with being different from the other kids.

Having never been to Africa before, her classmates’ misinformed stereotype of Africa as a place of poverty became her actual image of Africa. Embarassed, she drew further and further away from her culture and found herself saying, “I was born here. I’m not African.” She even encouraged her friends to start calling her Toni.

Then came the day in 4th grade that her parents told her they would be visiting Congo for her first time.

“No!” she sobbed, imagining giraffes and elephants chasing her down the streets.

When her family arrived in Africa a short while later and Umutoni stepped off the plane, she was greeted by a dark night and a quiet scene. In fact, it was exactly the same scene she had left behind in America. It didn’t look that much different from home—so it must also be home.

And she was right.

The beauty of Africa, the breeze easily wafting through her family’s condo, the adventure of exploring a whole new world—all of it reminded her of the stories she had been told by her grandma and she stopped believing the negative stereotypes. Her two weeks in Africa allowed her to finally embrace the culture she had struggled to accept but deep down always loved. Since then, she has worked to retain her culture by teaching herself her family’s native language Kinyarwanda, learning traditional dance, and enjoying many Congolese events, including weekly gift-giving ceremonies, in order to connect with her culture.

Her father works as a Job Developer for the International Institute of St. Louis, and she loves how open minded and accessible they are, describing their role in supporting St. Louis’s robust immigrant community as “irreplaceable.” Now her family is helping other immigrants adjust in the same way they were once helped.

Umutoni’s journey may have started with her parents’ and older brothers’ immigration to America, and continued through her childhood with her beloved Grandma Tate, but it’s been the active reconnection with her roots that has fostered the love for her culture.

Now whenever someone describes her, they say, “She’s very much African.”

And without skipping a beat, Umutoni Sebunyenzi always replies, “Very much so.” 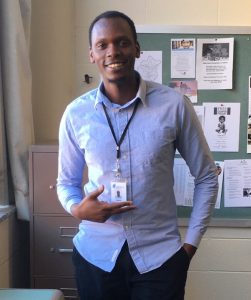 If you ever visit the International Institute, you may find yourself lucky enough to meet one of our beloved caseworkers Gandy Masimbuka. To the unfamiliar eye, he’s a tall, lanky, African man who exudes warmth and vivacity, constantly assisting his clients. But Gandy’s whimsical personality is not all that defines him. Only three years ago (2016), just like his clients, Gandy too journeyed to the United States as a refugee, carrying with him a story both heartbreaking and thundering with resilience.

In the Eastern Congo, Gandy lived a very happy life on his family’s cow farm. His father, aside from working on the farm, also led the local Church in the village. Gandy describes the church as a place of celebration with lots of singing and dancing. It is probably this community that gifted Gandy’s with his palpable spirit and liveliness. Or maybe he always had it.

One day, however, the happiness was brutally interrupted. One night, a militia group scourged Gandy’s village killing many of his friends and family including his parents who were always very supportive towards Gandy and his siblings. That same night, Gandy and his siblings spent three days walking to the Ugandan border to escape the violence. There, they stayed in a refugee camp.

More often than not, refugee camps do not offer many opportunities for their inhabitants. But Gandy managed to find one. He began making connections with a Kampala church branch that conducted services in the refugee camp. One of the people he met granted Gandy a scholarship, which allowed him to study in the capital city of Kampala. Not long after he finished his schooling, the United States accepted Gandy and his siblings’ resettlement in St. Louis where they would receive services from the International Institute.

When Gandy first arrived in America, he started working a factory making car parts. During this time, he admitted undergoing a wide range of adjustments. He recalls regularly getting lost and not understanding how to properly use a GPS. But aside from this, Gandy recalls how amazed he was by the help and kindness he received from the St. Louis community. He says when he needed help or didn’t understand something, someone would almost always try to help him.

Only a year and a half since his arrival, Gandy finally switched from making car parts to helping other refugees just like him adjust to their new lives in America. When asked if he felt a special connection working in refugee resettlement, Gandy responded, ‘Yes, because I have been a refugee and an immigrant. When people come to America, they face challenges. And I am here to help them.’ In the future, Gandy hopes to work in refugee resettlement at a higher level so he can help improve services for refugees coming to America and increase the number of refugees accepted into the United States.

Lastly, Gandy wants the St. Louis community to know that ‘immigrants are people who come with skills and knowledge. Immigrants like me—we are people who are capable of many things. Though we face challenges like language and culture, we are ready to take on those disadvantages and become great American citizens.’

Formerly known as Zaire, the Congo is home to a variety of wildlife and comprises an abundance of natural resources such as rich soil for crops, precious metals and minerals, and access to a powerful river that has the potential to turn the region into a center for hydropower energy. In addition, the Congo is home to over 200 ethnic groups and 250 languages, making the country one of the most diverse regions in the world. Based on this alone, the Congo should prosper as a country. Unfortunately, however, the Congo endures frequent turmoil including widespread food insecurity, resource mismanagement, sectarian violence, political instability, and high mortality rates. In fact, since the 1960s, over 5.4 million Congolese people have died as a result of warfare, making it one of the deadliest conflicts since World War II.

Ethnic Groups: Over 200 ethnic groups inhabit the Congo, most of which are Bantu. Of these groups, the Mongo, Luba, Kongo, and the Mangbetu-Azande have the largest populations, which together constitute 45% of the Congo’s population.