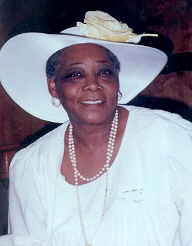 Anne-Marie traveled to the U.S. from Port-Au-Prince, the largest metropolitan city on the western coast of Haiti. In 1949 her husband accepted a fellowship at Howard University in urology, and so Anne-Marie followed with a hopeful spirit and an open-mind. After arriving, Anne-Marie took a job at the public library before finding her calling as a French teacher at Our Lady of the Villa.

Soon after, the couple began to build their family. Five children later, her dream of returning to Haiti seemed even further from reach. Though she loved the United States and the freedoms it gave to her, she couldn’t shake the longing she felt to return home and see the sister and brother she left behind. As her children married and found careers of their own, Anne-Marie finally had the time and freedom to make the trip back to Port-Au-Prince.

This time however, she had lost the mobility of her youth and remaining in Haiti for any extended period of time seemed unrealistic. Wheelchair accessibility is not a high priority in the political and economically strained region. Anne-Marie returned to her home in St. Louis, where she resided and found joy in seeing her grandchildren often, evident by the potato chip bags stacked in her kitchen, their favorite snack. She will always miss her homeland, but is confident that she will make frequent trips back to her sister’s home.

During the interview, Anne-Marie was both excited and determined to discuss Haiti, the land she missed so much. She spoke of the flowers and the selflessness of her people. “The people there are so nice. They are satisfied with what they have.” Before leaving, she passed along a business card with a quote on the back that stated, “There is a time and season for everything.”

This seemed to sum up the life of Anne-Marie Prophete. She had not initially wanted to come to the U.S. but did so with the best intentions and high expectations. She achieved everything she set out to do with a passion that many will never know. She rose the next generation of doctors and lawyers with the catholic teachings of “love each” and a passion for Haitian culture. Creole remains the dialect spoken in her home among her sister and children, but she now enjoys the ease with which she can converse in English, an attribute she credits to the International Institute.

The native Taino – who inhabited the island of Hispaniola when Christopher COLUMBUS first landed on it in 1492 – were virtually wiped out by Spanish settlers within 25 years. In the early 17th century, the French established a presence on Hispaniola. In 1697, Spain ceded to the French the western third of the island, which later became Haiti. The French colony, based on forestry and sugar-related industries, became one of the wealthiest in the Caribbean but only through the heavy importation of African slaves and considerable environmental degradation. In the late 18th century, Haiti’s nearly half million slaves revolted under Toussaint L’OUVERTURE. After a prolonged struggle, Haiti became the first post-colonial black-led nation in the world, declaring its independence in 1804.

Currently the poorest country in the Western Hemisphere, Haiti has experienced political instability for most of its history. A massive magnitude 7.0 earthquake struck Haiti in January 2010 with an epicenter about 25 km (15 mi) west of the capital, Port-au-Prince. Estimates are that over 300,000 people were killed and some 1.5 million left homeless. The earthquake was assessed as the worst in this region over the last 200 years. In October 2016, Hurricane Matthew struck southwestern Haiti causing widespread and devastating destruction, with an estimated 2.1 million people affected. President Michel MARTELLY completed his term in February 2016 with no successor in place. The National Assembly elected Interim President Jocelerme PRIVERT to lead until new elections take place in 2017.

Location: Caribbean, western one-third of the island of Hispaniola, between the Caribbean Sea and the North Atlantic Ocean, west of the Dominican Republic