Dr. Vanessa Vandergraaf, associate professor at Lindenwood University, spends much of her time with her mother, Homchanh. She takes her to doctors’ appointments, organizes her bills and paperwork, and visits her often. Vanessa understands the hardship Homchanh went through for her, and is happy to help in any way she can.

“What she has gone through. It does not even touch. Her escaping and risking her life,” said Vanessa when speaking of Homchanh who arrived in St. Louis with her three children in the harsh winter of 1981. The family was fleeing from the war-torn country, Laos, as a result of the Vietnam War. Her village was devastated amidst the constant bombing of the areas surrounding the Ho Chi Minh trail, a military supply route running from northern part of Vietnam through Laos and Cambodia to South Vietnam. Historians believe as many as 600,000 civilians were killed as a result. 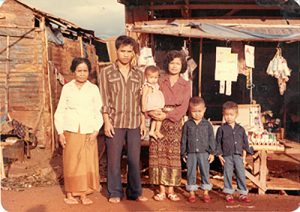 Homchanh’s journey to the U.S. was not an easy one. First, she had to pay pirates, who controlled parts of the Mekong River that divides Thailand and Laos, exchanging valuables in order to cross the river by boat. Even then, her safe passage across the river was not guaranteed. She then had to walk through the woodlands with her three young children, ages one and a half to six years old. She eventually reached a refugee camp in Thailand and stayed there for six months, then moved to the Philippines.

After some time at a Filipino refugee camp, Homchanh was able to come to St. Louis as a refugee with her family when the International Institute found a sponsor who helped her and her family resettle. Vanessa says that, to this day, she does not know the identity of this sponsor. If she could, she would be honored to meet this person or people.

Upon arrival in St. Louis, Homchanh, Vanessa, and the rest of the family started directly engaging with the International Institute. The International Institute picked them up at the airport and drove them to their new apartment. Homchanh and her husband learned English at the Institute and, after about a year, found jobs working as a cook’s assistant at a restaurant and housekeeper at Marriott hotel.

Vanessa says her mother may have only received the equivalent of a second-grade education in the U.S. but she is rich with wisdom regarding life. Her mother is the one who taught her to really think about financial management, in particular how to make your money work for you.  Homchanh visits their family back in Thailand on occasion and her most recent trip was to prepare for her own mother’s funeral.

In the future, Vanessa would like to lecture or conduct research as part of the Fulbright United States Scholar Program in Thailand, her mother’s home country.  Still, Homchanh often tells her that these days the country is nothing like the “old Thailand” she once knew.

Modern-day Laos has its roots in the ancient Lao kingdom of Lan Xang, established in the 14th century under King FA NGUM. For 300 years Lan Xang had influence reaching into present-day Cambodia and Thailand, as well as over all of what is now Laos. After centuries of gradual decline, Laos came under the domination of Siam (Thailand) from the late 18th century until the late 19th century, when it became part of French Indochina. The Franco-Siamese Treaty of 1907 defined the current Lao border with Thailand. In 1975, the communist Pathet Lao took control of the government, ending a six-century-old monarchy and instituting a strict socialist regime closely aligned to Vietnam. A gradual, limited return to private enterprise and the liberalization of foreign investment laws began in 1988. Laos became a member of ASEAN in 1997 and the WTO in 2013.