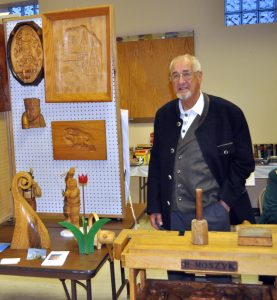 The end of World War II brought the beginning of the Cold War, and a defeated Germany was split between the Soviet Union and the rest of the former Allied powers. While West Germany was granted its independence, the East became assimilated into a Soviet bloc and adopted a centrally-planned economy. On June 16th, 1953, a decision to increase work quotas in order to satisfy Soviet authorities catalyzed a strike by construction workers in East Berlin. By the next day, this movement had spread across the country and grown into a full-blown revolt that might have overthrown the East German government had Soviet military forces not stepped in. Peter Moszyk, a young man about to graduate from high school in his hometown of Magdeburg, witnessed the Uprising of 1953 in his city. Three years later, having trained and apprenticed as a woodworker, Peter visited the labor office in Magdeburg so he could arrange a position at his friend’s woodshop. The official informed him that he still owed the state several years of military service. Completely unenthusiastic about fighting for the Soviet-controlled government, Peter packed his things, hopped on a bike, and crossed the border to West Germany that day.

Being one among a number of East Germans fleeing for the West, Peter Moszyk had difficulty finding an apartment, so he rode his bike to his cousin’s house in Norway. A couple weeks of travel found him in the Scandinavian country. Eventually, he returned to West Germany, where he bought a motor scooter and embarked alone on an odyssey to India and back. In West Germany, he found a girl with whom he went to elementary school in Magdeburg. Her name was Regina, and she had escaped East Germany shortly before he did. They soon married, and in the mid-60s, they moved to St. Louis in the US, where their immigration was sponsored by a German friend.

Arriving in America, Peter had little trouble finding work as a woodcarver. The weather proved to be one of the biggest stumbling blocks, as St. Louis has much hotter summers and colder winters than Germany. The International Institute was relatively young and small back then, and the couple only learned of its existence many years later. They had several children and spoke German at home, but then the oldest son was threatened with being held back at school because he could not speak English. The Moszyks learned to adjust, and practiced their own English in order to help their children assimilate. They founded a German club where people can speak conversational German with each other, and several years ago Peter constructed a Maibaum (“Maypole”) for the association, an imitation of the culture-infused wooden poles that resides in town squares across Germany. Regina passed away in 2012, but Peter Moszyk is proud of the life they were able to build together in St. Louis over the last fifty years. His advice to people of all ages, American or not, is to learn as much as possible about the world. It is our duty to understand how the world works, and do our part.

As Europe’s largest economy and second most populous nation (after Russia), Germany is a key member of the continent’s economic, political, and defense organizations. European power struggles immersed Germany in two devastating World Wars in the first half of the 20th century and left the country occupied by the victorious Allied powers of the US, UK, France, and the Soviet Union in 1945. With the advent of the Cold War, two German states were formed in 1949: the western Federal Republic of Germany (FRG) and the eastern German Democratic Republic (GDR).

The democratic FRG embedded itself in key western economic and security organizations, the EC, which became the EU, and NATO, while the communist GDR was on the front line of the Soviet-led Warsaw Pact. The decline of the USSR and the end of the Cold War allowed for German unification in 1990. Since then, Germany has expended considerable funds to bring eastern productivity and wages up to western standards. In January 1999, Germany and 10 other EU countries introduced a common European exchange currency, the euro.

Location: Central Europe, bordering the Baltic Sea and the North Sea, between the Netherlands and Poland, south of Denmark